I found these on a previous thread that we did a long while back, called 'More Silly Stuff'. It is indeed!

A man goes to see his doctor. "Doctor, I can't stop singing "The Green Green Grass of Home!"

Well, you must have Tom Jones Syndrome. (TJS).

Once in a while, a botched headline takes on a meaning opposite from the one intended:

Some are just slips of the tongue

Love the goofy headlines. They have a lot of those on Yahoo. I've
seen several that refer to shooting dead people. For example:

With regard to cows, did you know there are numerous animals
that kill more people than sharks? One of them is cows. Others
are Bees, Deer and Spiders. The worst is the mosquito which spreads
malaria.

I've looked for some Thanksgiving jokes. All the ones I found were kinda
lame. I guess the best was: What does a turkey say to a turkey hunter?
Answer: Quack, quack.

Gotta go. Going to Penney's to buy some bedroom slippers. I found
out a few years ago that most department stores only have mens'
slippers in stock during the Christmas season.

Oh yeah, My favorite joke in the "married pair" category is:
If Ella Fitzgerald married Darth Vader, she'd be Elevader.

Back from the Glendale mall. Bought some slippers. Stopped at Mary
Sees for candy. When I moved to California in the 60s, a pound of
Mary Sees cost $1.70. I think it's about $17 now. But gasoline was
about 35 cents. It's gone up a lot more.

Just saw this on FB.

A lady asked a librarian if she had a book about Pavlov's dog and Schrodinger's cat.

She said it rang a bell but she wasn't sure if it was there or not!

Hi GB, I love that joke about the librarian and the physicists. Good to
have you back, Willow.

Here are some ads that purportedly were actually published. There are
a whole bunch. Maybe we'll need multiple volumes.

Free one can of pork and beans with purchase of three bedroom, two bath home.

Wanted, somebody to go back in time with. This is not a joke. You'll get paid after we get back. Must bring your own weapons. Safety not guaranteed. I have only done this once before.

Well, the cut and paste mechanism no workee so well. Most of the jokes didn't post.
OK, you can try going here and reading same on your own. Good luck.

Oops! That doesn't work either. The URL won't post. I guess the folks who operate
the site want you to read the jokes at their place. Kinda like a library where you
can read the books but not take them home. Alrighty, we'll try something else.

Two vultures boarded a plane, each carrying two dead raccoons.
The stewardess stops them and says "Sorry Sir; only one carrion per
passenger."

Adam met Eve felt very sorry after they were expelled from the
Garden of Eden. They turned over a new leaf.

Joke from the old West:
Get off the cook stove, grandpa. You're too old to ride the range.

Don't say this to the boss, even if it's true:
Of course I don't look busy ...I did it right the first time.

Now the font is funny. Which would you rather have. A funny font
or a funny Valentine? (I didn't get to choose.)

Remember Tom Swifty jokes? The pun is at the end, usually in an adverb.

"I think it's perfectly normal to talk to fir trees", Tom opined.

"This instrument has reeds, but it's played with a keyboard,"
Tom said accordingly.

"Looks like someone removed all the twos from this deck," Tom deduced.

"And so we start another week at the office," Tom said mundanely.

"Is there any more sand paper?" Tom asked roughly.

"It's time to end this charade," Tom said finally.

My first job was working in an orange juice factory, but I got canned...couldn't concentrate.

After that I tried to be a tailor, but I just wasn't suited for it...mainly because it was a so-so job.

Then I tried to be a chef -- figured it would add a little spice to my life, but I just didn't have the thyme.

I managed to get a good job working for a pool maintenance company, but the work was just too draining.

Then I worked in the woods as a lumberjack, but I just couldn't hack it, so they gave me the ax.

After that I worked in a blanket factory, but it folded.

Then, I tried working at cheap hotels, but they just didn't
pay the rent.

Next was a job in a shoe factory; I tried but I just didn't fit in.

After many years of trying to find steady work I finally got a job as a historian until I realized there was no future in it.

My best job was being a musician, but eventually I found I wasn't noteworthy.

I became a professional fisherman, but discovered that I couldn't live on my net income.

My last job was working at Starbucks, but I quit because it was always the same old grind.

SO I RETIRED AND FOUND I'M PERFECT FOR THE JOB!
R

How do you get two flute players to play in unison?
Answer: shoot one.

What do you call a banjo player with half a brain?
Gifted.

Two musicians are walking down the street, and one says to the other,
"Who was that piccolo I saw you with last night?"
The other replies, "That was no piccolo, that was my fife."

Q: What do all great pianists have in common? A: They are all dead.

You're lost in the desert and you see Bugs Bunny, a cactus, and a
good banjo player. Who do you ask for directions? You might as well
try the cactus, the other two are figments of your imagination.

Q: How can you tell that a kid on a playground is a trombonist's kid?
A: He can't swing and he complains about the slide.
What is a gentleman? Somebody who knows how to play the
trombone, but doesn't.
Sign on the rehearsal room door:
Gone Chopin. Bach in a minuet.

And finally an actual bit of musical history: Mozart
wrote a piece called A Musical Joke. (Ein musikalischer Spaß.)
I'd post it here, but the entire piece is 20 minutes long. Even
an excerpt is 4 minutes. You can find it on Youtube. I guess
you have to be a musician to appreciate the humor. Just
sounds like typical Mozart to me.

This isn't a joke really but a Christmas card that we received a long time ago but I really thought was cute. It took me since Thanksgiving to get the scanning software on my new printer to work but I finally got it going no thanks to Windows 10.

Hi Willow, Glad to hear you got the printer to work. I don't know how
to use ours. Good King Wenceslas phoned Domino's for a pizza.
The salesgirl asked him:-
'Do you want your usual? Deep pan, crisp and even?' 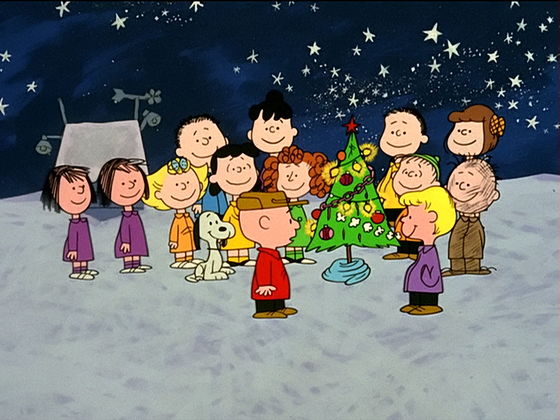 Did you see the news about Santa's elves? They are finally going to
school. Their first project is to learn the elf-abet.

Hey! That reminds me. I played Santa Claus. The first time was when I
was in 4th grade. It was 1949 and Gene Autry's recording of Rudolph the
Red Nosed Reindeer was the number one hit. Sold millions. Anyhoo
I had a Santa Suit and a corncob pipe. When I puffed on it, smoke came
out. It was actually flour. Even in those primitive times folks knew
about special effects.

The second time was for the Sons of Norway Christmas Festival when
I was about 60 years older. I passed out presents to the kids.

Thanks for the smiles.

Q. Where would a reindeer go if he lost his tail?
A. A retail store.

Q. What is the name of a toymaker who sings "Blue Christmas"?
A. Elf-is. 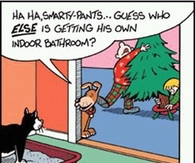 A new year's resolution is something that goes in one year and out the
other.

Not too funny, huh? According to the report, the people working on
computer generated humor found that 16% of the jokes were
considered funny by the (human) judges.

Somebody said that puns are the lowest form of humor. I don't
know why. Many of them are very clever. And they were
good enough for Shakespeare who said, for example: Now is
this winter of our discontent made glorious summer by this
son of York.

A friend of mine tried to annoy me with bird puns, but I soon
realized that toucan play at that game.

I couldn't quite remember how to throw a boomerang, but
eventually it came back to me.

So what if I don't know what apocalypse means!? It's not the end
of the world!

A few more jokes to brighten our drab lives.

There's a special place in Hull reserved for the inventor of autocorrect.

And here are some test questions to determine if you are a hillbillie.

Do you keep a can of Raid on your kitchen table?
Do you own all the components of soap on a rope except the soap?
Did your Momma tear her best dress while coon huntin'?

And here's a little quiz on medical matters.Two patients limp into a
clinic with the same complaint. Both have trouble walking and
appear to require a hip replacement.

The first patient is examined within the hour, is x-rayed the same day
and has a time booked for surgery the following week.

The second sees his family doctor after waiting a week for an appointment,
then waits eighteen weeks to see a specialist, then gets an x-ray, which
isn't reviewed for another month and finally has his surgery scheduled
for a year from then.
Now, the Question: Why the different treatment for the two patients?
Answer: The first is a Golden Retriever; the second is a Senior Citizen.
That last joke BTW is from Canada.

Here are some actual headlines I've run across in the online news:

Miss Manners: Do I have to give her our leftovers?

Well, Good Golly, Miss Molly! I'd forgotten all about these jokes. Even the ones I posted.
I'll have to see if I can find some more.

I didn't remember this thread, either. I was trying to find where I posted the headlines on another thread and couldn't find it, so did a Search 'headlines' and ran across this treasure of a thread.

The Ole and Lena joke reminds me of this one:

The doctor called his patient's wife into his office alone to give her her husband's diagnosis and prognosis.

Doc told her that her husband would only live if she cooked him three hot meals a day, kept it peaceful, and gave him affection every day.

When she came out of the office, her husband asked her "What did the doctor say?"

She replied "I'm sorry, Honey, you're not going to make it."

Here is an amazing video. And there are more by the same guy on Youtube.
Presto Change Oh.